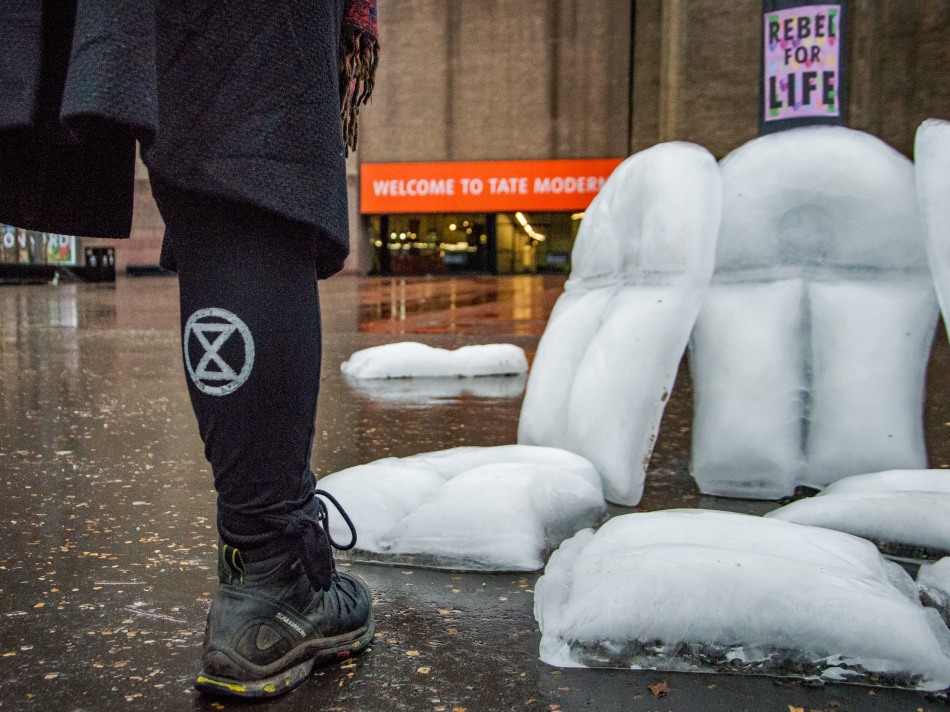 This morning, 15 life jackets appeared at the front of the Tate Modern and in Parliament Square. They were all made of ice. You may ask yourself, why make life jackets out of ice? The link and reason that anonymous artivist ‘Gray’ wants you to see is this: Climate Change.

The piece, which has been created in support of environmental activism group Extinction Rebellion is called ‘Tipping Point’, and has been designed to highlight the link between current and future immigration and the ecological emergency that we find ourselves in. It is fairly evident to say that the use of ice is to emphasise that these issues are inherently stuck to a finite timescale.

“‘Tipping point’ is about the relatively untalked about link between migration and climate change.” Stated the artist behind the piece.

“As 300,000 – 400,000 people lose their lives annually due to climate change, many more in climate change hot-spots are already left with no choice but to move, including some of those who have risked their lives to cross the Mediterranean.”

“I am part of a grey artivist group who invite others to participate and enter into a safe exchange using art to reflect on what is happening in society. This artivism is part of a new movement which invites collaboration across the arts, advocacy, policy & education to respond to today’s unprecedented challenges. As Western-based artists we are keen to hear more from people with lived experiences of displacement.”

“Amitav Ghosh in his essay on the subject ‘Confluence and Crossroads’ has said ‘… experts estimate that by 2050 there will be as many as 700 million climate change refugees across the world.’”

Migrations of peoples north from both the Central Americas and the Middle East that have been occurring within the last decade have been directly contributed to, if not exacerbated by, climate change.

In Syria, from 2006 to 2011, large swaths of land suffered through extreme droughts which in turn lead to increased poverty and relocation by rural people to urban areas “That drought, in addition to its mismanagement by the Assad regime, contributed to the displacement of two million in Syria,” said Francesco Femia, of the Washington, D.C.-based Center for Climate and Security.

“That internal displacement may have contributed to the social unrest that precipitated the civil war. Which generated the refugee flows into Europe.”

The research on climate-related migration is still imprecise. The number of predicted migrants moving as a repercussion of  climate change over the next 40 years varies from 25 million to 1 billion. While climate change does incur the increased possibility of migration, it does not guarantee it. What climate science does suggest is that those in poorer countries that lie on and around the equator will be incredibly vulnerable to the effects of a warming climate.

In some cases, while climate change may influence poorer communities, who exist on a subsistence income, to move, their financial situation may not allow them the ability to migrate. Relocation costs would vary in each circumstance, and some families who rely on income from agricultural production (an industry that would be greatly affected by climate change), simply may not have the money to move.

The migrant caravans that are currently travelling from Guatamala, Honduras, and El Salvador, into North America may have been influenced by the exacerbating climate change in those countries, as communities experience crop failures and other issues. This in turn may have affected the rise of far-right politics within the US.

One report estimates that there could be 150 million to 350 million people displaced by climate change by 2050, so a new system would have to be put in place to manage that amount of migration.

#climatebreakdown #climateaction #climateemergency #savetheearth
The natural environments of the world should be treated as would be the greatest pieces of art. Rare, beautiful, and open to be enjoyed by all. We at Deeply Good will strive to acknowledge that connection. COMING SOON.